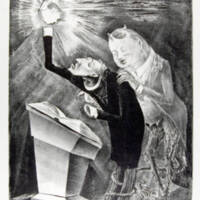 Adolf Dehn was born in Waterville, MN in 1895 and studied art at the Minneapolis School of Art and the Art Students League of New York (Cox, 1977, p. 167-8). During World War I, Dehn spent four months imprisoned for his pacifist views, then eight months teaching art to soldiers in a hospital before being discharged and returning to Waterville. Due to hostility from residents for his refusal to fight in the war, Dehn returned to New York before heading to Europe (Goretz, 2018).

During the 1920s, Dehn toured around Europe, honing his skills with lithography by capturing the cities and landscapes he saw (Rubinstein, 1987, p. 321). His works from this time often had a “satirical sting” to them, portraying a “decadent, oversophisticated scene highlighted by abstract, angular distortions of the human figure” (Cox, 1977, p.170). He returned to the U.S. in early 1929. He spent the Great Depression years making money with his Adolf Dehn Print Club, where he sent original lithograph prints to subscribers and with opportunities through the Associated American Artists and the American Artists Group. In the late 1930s, he took up watercolor painting, with the results well received by critics and buyers (Rubinstein, 1987, p.324).

Dehn resumed traveling after World War II and continued to create lithographs recording his travels, focusing on landscapes and the people he saw. On May 19, 1968, he died in New York City (Rubinstein, 1987, p.324).

Here, you will find a collection of Dehn’s works that display his range of subjects and styles. Use the tabs on the right to navigate four highlighted categories of his work: Portraits, Landscapes, Satire, and Storytelling. You can also view a timeline, which provides chronological context to the evolution of Dehn’s art.

Been There, Dehn That | Digital Collections From St. Kate's

Lithograph | The Metropolitan Museum of Art